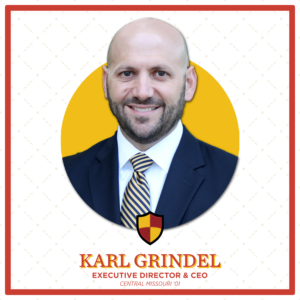 INDIANAPOLIS– The Delta Chi Board of Regents announces the coming transition of the Executive Director and CEO. On Jan. 31, CEO Jerod Breit (Central Missouri ’04) will relocate to lead a Kansas City-based non-profit organization. The Fraternity will welcome Karl Grindel (Central Missouri ’01), a past staff member and long-time interfraternal leader, “back home” to lead Delta Chi.

“Jerod’s incredible leadership has been critical for our Fraternity in an unprecedented time in our history,” said “AA” Patrick Alderdice, International President. “Because of his work and the work of our dedicated staff, our chapters are stronger and every single member has new opportunities at their fingertips for personal growth. You simply can’t ask for more from a leader than that! We know Jerod will continue to make a positive impact in the community in his new role with MADD.”

Breit guided the Fraternity through a pivotal time. He relocated the Headquarters from Iowa City to Indianapolis, bringing a new era of modernization to operations and developing the historical education center. Under the implementation of a new chapter coaching model, Delta Chi emerged from the pandemic as a stronger organization, maintaining financial security and delivering consistent service resulting in no chapter losses related to COVID-19. His tenure has culminated in incredible growth, resulting in double digit growth two years in a row. Breit led the development of a new partnership between the Fraternity and Dale Carnegie. This partnership will provide personal skills-based training and leadership development to prepare members for life after college, resulting in skills-based certificates and college credit.

“When Jerod shared his news with us, we knew who we believed the right person would be to build upon his great work, and we reached out to Karl to interview for the role,” said Alderdice. “Karl Grindel has more than 20 years of fraternal leadership experience – at Delta Chi and beyond, and we are confident that he is the strategic leader to take our Fraternity into the future.”

Grindel served on the Delta Chi staff from 2001 to 2011, first as a Leadership Consultant, then Director of Chapter Development, and finally, Assistant Executive Director for five years. For the last 12 years, he has served as the Associate Executive Director and Chief Operating Officer of Delta Upsilon Fraternity, where he gained critical experience in strategic plan implementation, guiding organization-wide change, team management, and advancing data-driven decisions.

Delta Chi will benefit greatly from Grindel’s vast fraternal leadership experience. During his tenure at Delta Upsilon, he managed a collaborative team of nearly 20 employees. In his time, they enhanced membership education opportunities, quadrupling the percentage of undergraduate participation. DU launched a new member development program, restructured officer education to transition from 13 volunteer-led programs to five staff-developed regional leadership academies, introduced an advisors’ academy, expanded a program for emerging leaders, and provided expert-facilitated chapter retreats. Grindel also coordinated the use of data to drive fraternity operations across departments through a partnership with Dyad Strategies. Further, he coordinated the transition to a standalone general liability insurance policy, providing a 35% savings; oversaw the adoption of a substance-free housing policy; and managed the Headquarters property and facility.

Grindel has also been a dedicated Delta Chi volunteer, serving on three Alumni Board of Trustees, on the Ritual Committee and as a Vice Regent for Region IX. He has facilitated nearly every Delta Chi program and was a 2012 recipient of the Fraternity’s Meritorious Service Award.

“I am thrilled to return to Delta Chi and continue to advance our success in growth and the membership experience,” said Grindel “It is exciting to come ‘back home’ and at a time when there is visionary leadership and momentum. From chapters’ recruitment success last fall to new opportunities that will benefit our brothers and chapters through partnerships with Dale Carnegie and Dyad Strategies, it’s an exciting time for our Fraternity. I look forward to joining the tremendous team at Delta Chi and serving our members in the years to come.”

Karl lives in the Indianapolis area with his wife Ashley and their one-year-old son, Tanner. Throughout this month, he is working with Breit and the Board for a smooth executive transition, officially joining the headquarters team on Jan. 26 and taking the reins as CEO on Feb. 1.

The Delta Chi Fraternity is an international brotherhood of undergraduate and alumni members whose goals are to promote friendship, develop character, advance justice, and assist in the acquisition of a sound education. Since its founding as a law fraternity in 1890, Delta Chi has grown to over 130,000 members and 144 collegiate and alumni chapters across North America. The Fraternity is dedicated to creating and cultivating a lifelong, values-based experience through networking, philanthropic, and leadership opportunities as well as events and gatherings to foster friendship and belonging. Learn more about us at www.DeltaChi.org.