Happy Holidays! The International Headquarters will be closed Dec. 23rd to Jan. 2nd

Each year, Delta Chi recognizes our collegiate chapters, alumni chapters, members, and friends for the amazing things they do on campus, in the Fraternity, in their careers, and in society at large.

Delta Chi’s most coveted and prestigious award is the President’s Cup. Each year, Delta Chi recognizes the top two chapters and provisional chapters in both the red and buff divisions. The President’s Cup winners have demonstrated superior excellence in operational performance, while promoting a strong values-based fraternal experience and creating a measurable impact for their members, campuses, and communities. 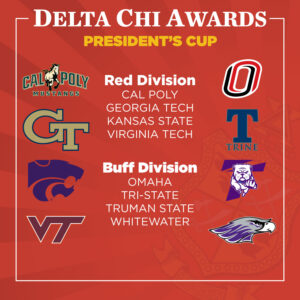 Delta Chi of the Year

The Delta Chi of the Year recognizes alumni who have distinguished themselves in such a manner that their peers recognize them across the United States, Canada and/or the world. Their contributions to Delta Chi are not a criteria of this award. 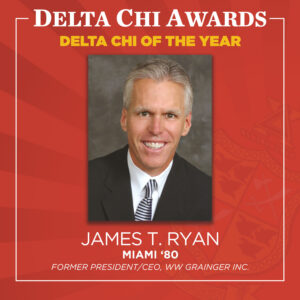 The Outstanding Programming award recognizes the exceptional programming created and implemented by our undergraduate chapters in two areas: Member Safety & Wellness and Member Education. A “program” can be any singular or series of events planned by the chapter but must demonstrate a strong connection to safety & wellness or member education.

Rutgers
During the 20-21 academic year, the Rutgers chapter worked closely with their faculty advisor and partnered with local school districts to create and implement a virtual tutoring program to support elementary through high school students. Throughout the pandemic, Rutgers’s brothers lived Delta Chi’s values and sincerely Developed Character while Assisting in the Acquisition of a Sound Education. Brothers would volunteer their time to tutor various subjects over Zoom and engage with struggling students and their parents. The chapter said “we believe that the education of young students is very valuable and online education hinders a child’s ability to learn. Therefore it was necessary that we go beyond to help young students in the communities around Rutgers to receive a sound education.”

Virginia Tech
The Virginia Tech chapter created a scholarship program honoring the memory of Brother Brett Harlow, Virginia Tech ‘93, who passed away in July 2020 after a prolonged fight with cancer. This scholarship program strives to honor Brother Harlow’s memory and his lifelong commitment to the values of Delta Chi. The chapter said, “in the wake of Brett’s passing, we came to realize that our strength comes from one another in times of hardship and mourning; with the establishment of this scholarship program we celebrate Brett’s life and honor his memory. This greatly enhances the fraternity experience by allowing brothers to carry out Brett’s legacy on a daily basis and perpetuates the lifelong commitment of Delta Chis to further enhance the chapter’s educational fund to uphold the fraternity’s values.”

Tarleton
During the 20-21 academic year, the Tarleton chapter developed a fundraising program that not only supports the chapter, but also helps to re-engage alumni. Through their program, the Tarlton Delta Chi Alumni Association, the chapter has raised over $2,000 while re-establishing their alumni support. Alumni are incentivized to contribute to this fundraising program and brothers are working harder than ever to promote the lifelong bonds of the Fraternity. This program demonstrated Tarleton’s commitment to ensuring the longevity of their chapter, regardless of the pandemic’s impact, and living out Delta Chi’s value of Promoting Friendship.

Truman State
Truman State developed their Mental Health Initiative program to support brothers throughout the pandemic and beyond. COVID-19 allowed the Truman State chapter to re-examine their operations and assess the needs of brothers. Realizing the importance of mental health and the need to create a positive and intentional support system, the brothers found creative and impactful ways to engage in brotherhood. This included providing resources and educational materials within the Fraternity property,  activities (such as yoga) to support mental health, and intentional outreach to support all brothers. The chapter said, “Our chapter’s Mental Health Initiative was an innovative step toward an inclusive and cohesive atmosphere for our organization. We denote that mental health should be a priority for all people, regardless of background, especially during a global pandemic. The Mental Health Initiative program is ongoing and evolving so that we can continue to adapt and destigmatize conversations around mental health.”

Missouri State
With a 43% increase in membership from spring 2020 to spring 2021, the Missouri State chapter had a stellar recruitment this academic year. Focusing on implementing safe and responsible recruitment events to accommodate pandemic restrictions, the chapter saw its strongest retention of new members. They plan to continue  focusing on member retention post-recruitment to ensure they maintain their positive growth going forward.

Louisiana Tech
Louisiana Tech is a chapter that consistently practices year-round 365-recruitment. Although the pandemic was challenging for their overall growth, the chapter found innovative ways to connect with potential new members and increased their membership by 16% from spring 2020 to spring 2021. As one of the top recruiting chapters at Louisiana Tech, the chapter was intentional about recruiting the right men into the Delta Chi brotherhood, no matter the limitations the pandemic posed.

The Community Impact Award recognizes chapters and colonies that have gone above and beyond in their philanthropy, community service projects, and/or campus communities.

Georgia Tech
Throughout the 20-21 academic year, Georgia Tech made a profound impact both on and off campus. Beyond its substantial V Foundation contributions, the chapter supported the Ron Clark Academy, a private nonprofit middle school dedicated to providing educational opportunities to underprivileged students in southeast Atlanta. The chapter was also a strong contributor to the GT Dance Marathon, raising over $11,455 for the Children’s Miracle Network. Additionally, even during a challenging year of in-person opportunity for service, the chapter continued to serve the Atlanta community with over 300 service hours through student food drives, the Central Night Shelter (a men’s homeless shelter) and other local initiatives.

Lehigh
The Lehigh chapter demonstrated outstanding efforts to support their local community both on and off campus. This year, the chapter heavily supported Girls on the Run, the American Cancer Society’s Relay for Life, the V Foundation for Cancer Research, and service initiatives like supporting the Caring Hearts Bethlehem program. Most impactful for the brothers this year was supporting the Testicular Cancer Foundation (TCF). After learning about a brother who had been diagnosed with testicular cancer, the chapter set to work immediately showing support and brotherhood, even in a virtual setting due to the pandemic. Through their campaigning and fundraising efforts, the chapter raised $13,236 for the TCF, in addition to all its other charitable contributions.

Jacksonville State
Jacksonville State had its strongest year ever of philanthropy and service initiatives that greatly impacted its campus and local community. Off campus, the chapter partnered with a local fire department to support children and raise funds to provide a holiday filled with toys, games and necessities for their families. The chapter also partnered with a panhellenic sorority to volunteer their time to a local easter egg hunt. On campus, the chapter was a premier organization to support the inauguration of the University’s new president, Don C. Killingsworth (Delta Chi ‘95). The chapter volunteered their time to serve dinner at the inauguration which positively enhanced the image of Delta Chi and the Fraternal community on campus.

San Antonio
Despite in-person limitations the San Antonio Chapter continued its dedication to making a profound impact on campus and off this academic year. With nearly 130 volunteer hours, the chapter spent time supporting Habitat for Humanity, volunteering with the San Antonio Food Bank, putting presents together for Clarity Child Guidance Center, and volunteering to help the University maintain its on-campus garden. In addition to its service initiatives and supporting the V Foundation for Cancer research, the San Antonio chapter found a new partnership with THRIVE, a local LGBTQIA+ homeless shelter. The chapter raised $2,235 for their daily operations.

Delta Chi recognizes the top six chapters and colonies in the red and buff divisions with the Award of Excellence. These chapters and colonies demonstrated outstanding performance in Delta Chi’s core competencies (Promote Friendship, Develop Character, Advance Justice, and Assist in the Acquisition of a Sound Education) and received the highest overall scores for the 2020-2021 academic year.

The Chicago Cup recognizes an alumni chapter with excellence in programming, communication, and meeting the needs of its members.

The Atlanta Area Alumni Chapter continues to regularly operate at a high level, offering a variety of ways for alumni to stay connected and engaged with Delta Chi. This includes brotherhood events, planning and participating in RLCs, and sponsoring philanthropic events. They also support and encourage connections with undergraduate chapters that provide pathways for volunteer recruitment as well as modeling lifelong engagement.