Skip to content
Announcement: Join us for the 2022 International Chapter Call – February 1st at 8pm ET

2022 is going to be an amazing year with the staff and new additions all working toward one common goal – making Delta Chi better.

“I am excited to say that we are now back to pre-pandemic staffing levels,” Breit said. “2022 is going to be an amazing year with the staff and new additions all working toward one common goal – making Delta Chi better.” 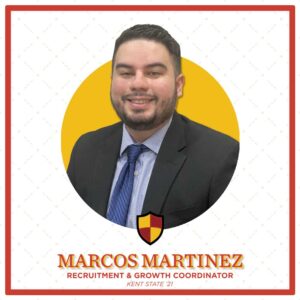 Martinez graduated from Kent State University in spring 2021 with a bachelor of science degree in sports administration. As an undergraduate, he was an Alpha class member for the Kent State Chapter and served as the “B” for consecutive terms. As the “B”, Martinez oversaw a chapter that won several university accolades, including Community Service Project of the Year for their special needs dance, raised thousands of dollars for the V Foundation for Cancer Research, won several Delta Chi awards, and earned their charter within their first four years. He also served as the philanthropy chair and Associate Member Counselor (AMC). Martinez served on the IFC board as the Director of Philanthropy and Community Services, helping support and shape the Greek community at Kent State.

“Marcos will bring energy and knowledge to the team that will help make Delta Chi better,” Breit said. “I look forward to him joining the team and making his mark on the Brotherhood of a Lifetime.”

When not working, Martinez spends his time competing in e-sports and is an avid Cleveland sports fan. He has been involved as a player and streamer in Rocket League and Counter Strike: Global Offensive for the last few years. 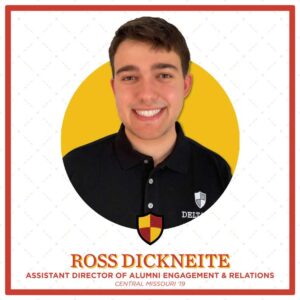 Dickneite attended the University of Central Missouri where he studied business management with a double-minor in leadership studies and computer information systems. He joined the Central Missouri Chapter in fall 2015 and would go on to hold several positions for the chapter, including “A”, “E”, AMC, and brotherhood chair. As “A”, the Central Missouri Chapter won six IFC awards. He also served on the IFC board as Vice President of Philanthropy and Community Service and was an alumni ambassador for the University, working closely with donors and alumni engagement professionals. He was recognized as the Fraternity and Sorority Life Emerging Leader of the Year and achieved the 5-Star Chapter of the Year award.

“Ross has demonstrated a commitment to Delta Chi at both the undergraduate and alumni levels that is an example for all brothers,” Breit said. “His experience working with alumni and in recruitment, combined with his volunteer leadership, makes him an asset to the Fraternity and I am excited to see him lead and innovate such a critical area of the organization.  We are all elated to have him join the team.”

Since graduating, Dickneite has maintained involvement with Delta Chi, serving as the Alumni Board of Trustees President for the Central Missouri Chapter. He most recently worked as an admissions representative at State Technical College of Missouri.

Dickneite enjoys spending time with his wife and high school sweetheart, Kristen, and their dog, Charlie. He’s an avid sports fan, frequently attends opening night Marvel movie releases, enjoys the occasional game of chess, and values time with family and friends above anything.